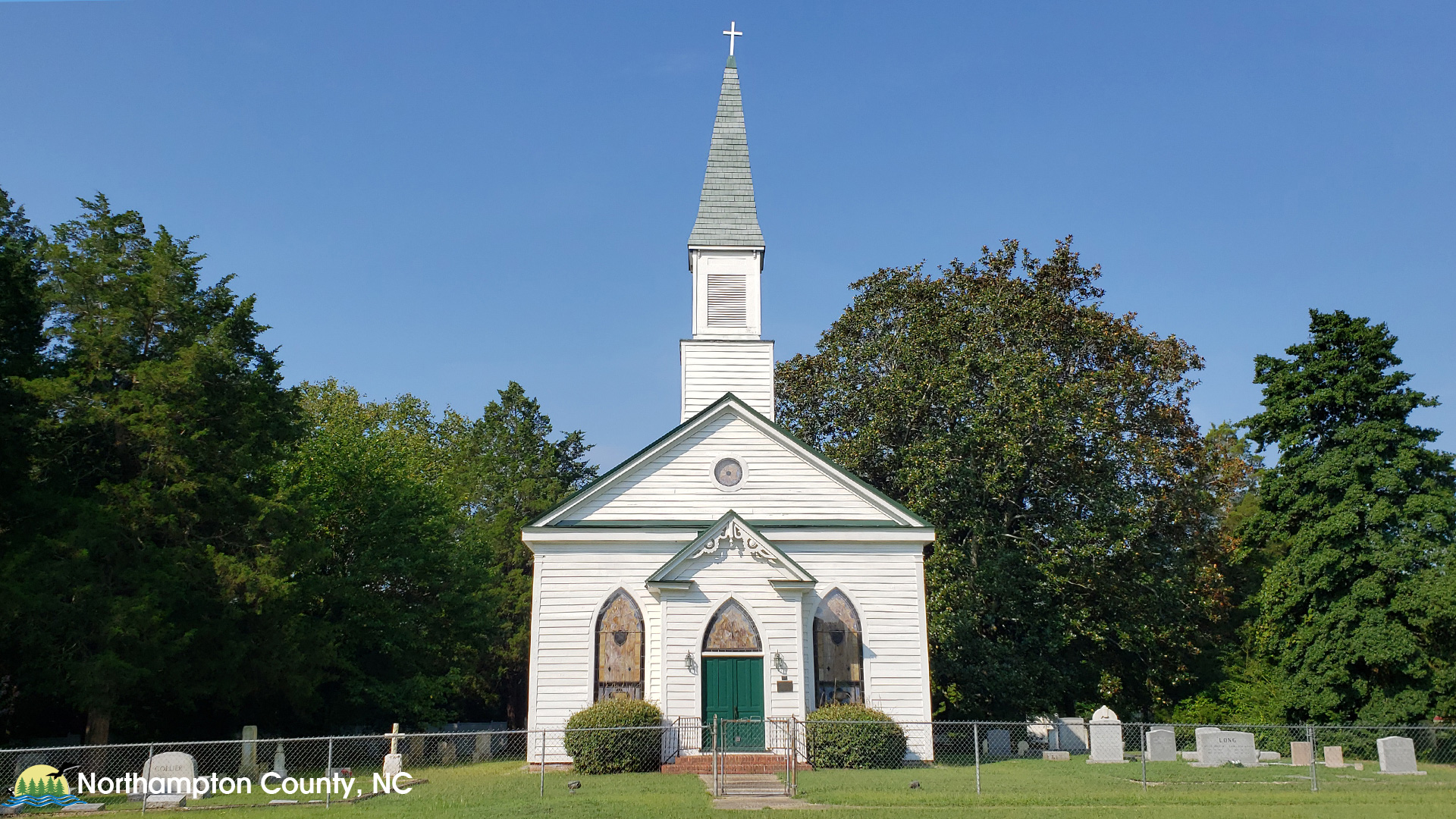 The Garysburg United Methodist Church and cemetery are situated in the small community of Garysburg (1980 census population 231) on a one and a half-acre lot slightly removed from the main thoroughfares. l The serenity of the site is further complemented by a grove of mature shade trees, and the cemetery spans out to each side and to the rear of the church itself.

Roderick B. Gary, who was prominent in Garysburg affairs and owned the hotel there, gave the land for the church in 1848. 2 Its exact date of construction is not known but church tradition maintains that it was built in 1853. 3 This construction date seems plausible as the structure's Greek Revival temple-form was popular for church architecture in eastern North Carolina during the l850s.

The church stands one-story high and has a rectangular configuration. The fenestration of the front (northeast) elevation is three-bays with the main entrance distinguished by a central projecting vestibule. The side (southeast and northwest) elevations are three bays wide and the rear (southwest) elevation is simply two-bays. Exterior walls are protected by weatherboards. Both its handsome facade and rear elevation display pedimented gables highlighted by boxed cornices--a feature characteristic of the popular Greek Revival style. Also, typical of the style is the plain pilasters with simply molded capitals that serve as corner posts.

Complementing the church's temple~form in both scale and shape, the projecting vestibule is distinguished by a simple gable-front roof with cornice returns. A lacey sawn work gable ornament highlights this roofline. The central entrance is marked by a pointed-arch opening composed of a double-leaf doorway surmounted by a colorful stained glass window. Extensive repairs were made to the building about 1905 and the vestibule may have been added at that time.

Another feature possibly added during this remodeling is the tall graceful bell tower. Here, a square weatherboarded base supports a smaller square-in-section louvered bell enclosure which in turn is protected by a towering four-sided spire with flared eaves. A simple wooden cross caps the composition.

The existing windows in the church illustrate the congregation's efforts in past years to keep pace with prevailing architectural styles such as the Gothic Revival. In this case, the windows appear to have originally had flat lintels which were subsequently changed to Gothic pointed arches. The exterior window surrounds are flat with the exception of a narrow bead that runs along the inner edge as opposed to the interior surrounds which are wide three-part Greek Revival ones. In support of the alteration theory, small differences can be detected between the original surrounds in the lower portions of each window and later surround its pointed arch above. In 1956 stained glass was installed in each window throughout the church.

With the incorporation of the vestibule into the church plan, access into the sanctuary was provided initially through the double-leaf doorways one to each side of the vestibule,6 an area which recessed into the sanctuary. These doors now open into small classrooms created by the addition of partitioning walls. Each door is composed of four flat panels, and its rails and stiles are pegged together in the upper and lower corners.

Entry into the sanctuary is presently through the later double-doors on the vestibule's south wall. The sanctuary fully reflects the subsequent remodeling of the church during the late nineteenth and early twentieth centuries from its pews to the decorative use of tongue-and-groove sheathing. The plan is distinguished by two aisles leading to the chancel which is defined by a raised platform and framed by a beautifully turned balustrade. This late nineteenth-century rail has been moved forward several feet to extend the altar area. The pulpit, chancel chairs, and pews appear to date from the late nineteenth and early twentieth centuries. Two windows, now replaced by doors, were located on each side of the pulpit area on the south walls.

Simple vertical tongue-and-groove boards comprise the wainscoting beneath a handsomely molded chair rail; however, the most unique woodwork feature of the church's interior is its magnificent decorative patterned ceiling installed in 1905. Coffered panels are simulated by alternating the directional placement of the tongue-and-groove sheathing and then framing each square formed with large beams. The intersection of each square is highlighted by a drop pendant. A deeply coved cornice horizontally sheathed with the same narrow board is the final accent in this robust ceiling configuration.

A one-story brick fellowship hall with Sunday School classrooms was built just north of the church in 1959.